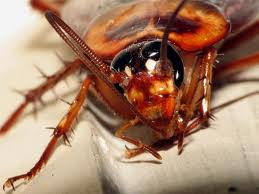 I’ve been meaning to read Kafka for ages – so I can just drop the fact that I’ve read his stuff casually into conversations and become even more popular than I already am. Well now I’ve got a Kindle and I’m not afraid to use it, so I bought Kafka’s entire works for $2.50, which is kind of an insult to him come to think of it.

This guy wakes up in the morning, and he’s a cockroach. His first thought is, damn, I’ve slept in! What will the boss think when I don’t catch the early morning train! How will I support my aged parents and lovely younger sister?

Because the thing is, he awakes on his back, and it takes him at least till the end of the first chapter to get onto his little cockroach legs, and that not without banging his poor little head and making cockroachly ooze come out.  Also the boss is extremely strict about these things (lateness, I mean, not ooze).

Well, he DOES get sacked – surprise surprise – but throughout most of the story he isn’t really thinking ‘Oh God, how awful, I’m a cockroach!’. No, he’s thinking things like, ‘I’m hungry’, and ‘how nice and cosy it is under the couch’, and ‘why won’t they let me sit at the dinner table any more?’.

As for his family, after they get over their initial fright at being confronted by a jaw-snapping, pus-oozing and presumably over-sized cockroach who is somehow recognisable as their boy, they start feeding him rancid scraps and re-decorating his room, bug style.  It’s not that long, though, before even his dad wants to step on him.

Eventually..well I won’t spoil it but the thing is, this is a very odd story. I mean, if YOU woke up and you were a cockroach, wouldn’t you be thinking about other things than being late for work? But, he does have a lot of fun running over the walls and ceilings.

If you HAD to wake up as a creature, what creature would you be? I would be a magpie, because it’d be an outlet for my natural viciousness (where I live, they spend a lot of time swooping bicyclists, well I don’t like bicyclists much either..).